I’m not exactly a star in the kitchen, but I can pull together the basics.  Covid has struck my family, so I spent Monday cooking a few meals to get them through the next couple of days. Then I drove to Sioux Falls to make the delivery. 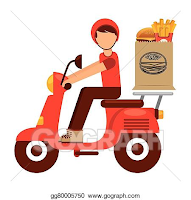 My son-in-law tested positive and has been home isolating in their basement since Thursday.  The kids had to stay home from school this week too, quarantined due to exposure.  I offered to bring supper for at least a couple of nights so my daughter didn’t have to cook after work. However . . .

When I parked in their driveway my daughter came out before I could even get out of the car. She is a respiratory therapist in a big and busy hospital, and was supposed to be at work. But she had just come home early because she isn’t feeling well.  She was waiting to get a call back to schedule testing - which she had done early this morning.

We both kept our masks on and I handed over the food bags outdoors.  No touching.  We’re hoping that the symptoms for both her and her husband stay mild, and that none of the 3 kids get sick either.  But I'm thinking I may be doing a little more cooking and delivering.

I did a short video chat this morning with her and the kids.  I had to remind them all that they needed to be extra helpful and KIND to their mom since she isn't feeling well either.  You can imagine how 7 year old twins and a 9 year old can get into mischief when they think no one is watching.

Saturday was cold and the snow began about supper time.  By noon on Sunday we had about 5 inches of wet heavy snow.  A perfect weekend for some sewing. 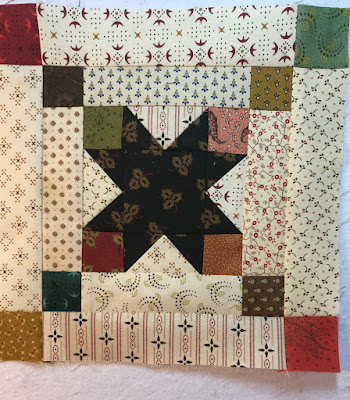 Some progress was made on Kim Diehl's Pleased As Punch small quilt.  The center of the quilt is layed out like a big 9 patch - with 4 star blocks and 5 lily blocks.  I now have 3 lily blocks made and 2 of the star blocks.  The outer border has actual 9 patch blocks - 12 of them, and those are all made. 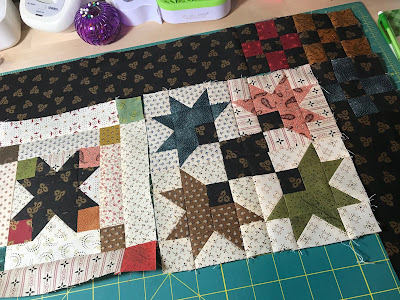 It's always fun when I can begin to see how the layout is going to look.  This is definitely going to be one of my favorite Simple Whatnots designs.
My other Sunday sewing was to get the binding on both of the Silent Night table runners. A picture of those runners will have to wait for another day however because they are very dark and just didn't photograph well in the evening light.

What's on your design wall today?  I'm linking up with: 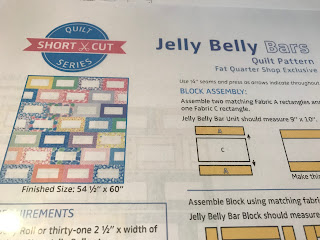 I had saved this free pattern from the Fat Quarter Shop, with the idea that it would be a quick way to use a couple of jelly rolls that have been languishing in the stash.  I decided to put this on my 2021 UFO Challenge list (and yes I've started the list already), and even selected a bright jelly roll to use. 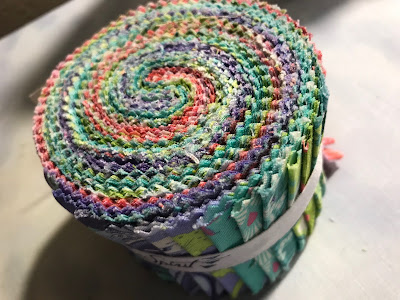 In the drawer with the bright jelly roll was also this wintery blue jelly roll.  And tucked into the bag with the blue roll was a bag of laser cut blue snowflakes.  Obviously I had intended to use them together - but as what?  Who knows!!  Well I now have a plan and have begun to execute that plan. 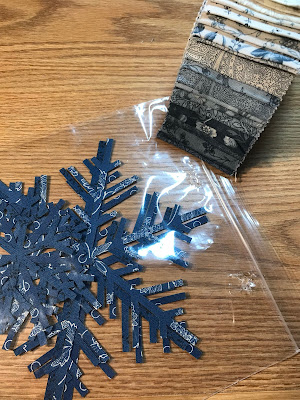 Recently I signed up for a Secret Santa type of Christmas gift exchange with an online group of quilt-y friends.  We have a small budget ($20) and can choose to make any small project.  I'm going to use the Jelly Belly pattern, the blue/cream jelly roll, and the laser cut snowflakes to make a couple of table runners.  I can use one for the gift exchange and one to keep - or give away.  I even had the cream background fabric in my stash.  There is enough of everything so I should not have to buy anything unless I end up buying a little something for the backing and or binding. 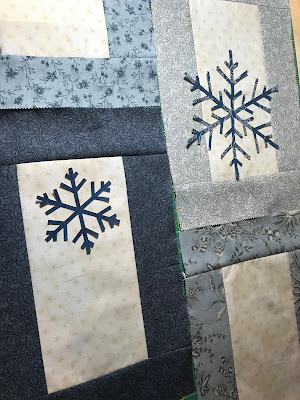 The Rainbow Scrap Challenge is something I've participated in for several years, and it is a fun way to put a focus on using up scraps. Although . . . in reality I don't think I've made even a dent in my scraps over the years. But that's OK. 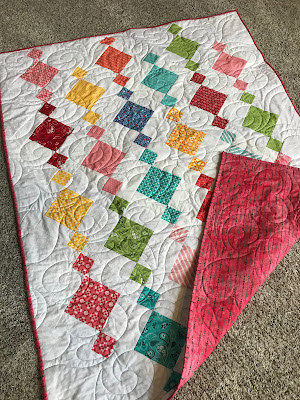 Beads is one of my RSC projects going on this year, and it's the first one completely finished.  Each block is made from 2 charm squares plus background. The background in this one is just as scrappy as the charms.  I used the pinky salmon backing to bind this one as well.  The quilting that Carol did is very swirly and has a teal thread so it shows up so nicely, and picks up on the teal in that backing.
A cute child's quilt to add to my gift/donate pile.

Just one finished block so far 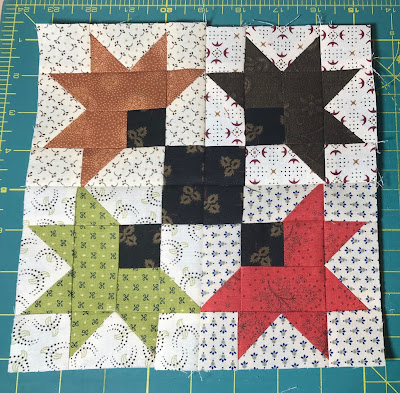 The first of 5 lily blocks for Pleased As Punch is done, and I have the next one half done.  This block is 8.5" square and has 68 separate pieces in it.  That means there will be 340 little pieces in the 5 blocks - which will then be put together with 4 star blocks.  Maybe I need to stop counting the little pieces for this project.  Yikes!!

Pleased As Punch is a Kim Diehl Simple Whatnots pattern from Club #9.  I'm a couple of months behind on Club 9, but had set a goal of working on at least one of them in October.  So . . . I've cut all of the strips needed - from 1 black print, 8 cream prints, and 20 assorted colored prints. Lots and lots of strips are cut and organized. 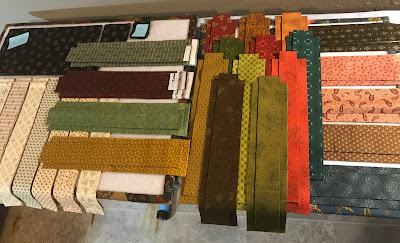 But I'm not just cutting all of the little parts for all of the project at once because I have this fear of messing up the blocks completely.  And oops!!  The second Lily block unit I made had a section wrong.  I did fix this by cutting a new cream 1.5" x 2.5" rectangle and a new green 1.5" square. 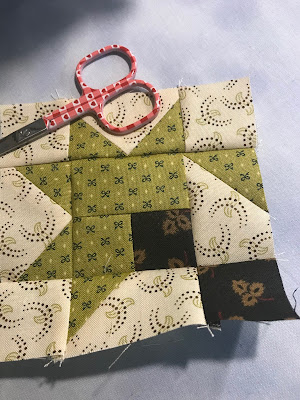 The first Lily block section went together without any problems.  So, there are 2 done and 18 more of these to go - one in each of the 20 colors.  The pattern called for a mix of creams in each of these, but I decided that I'm less likely to mess these up by keeping the creams together. 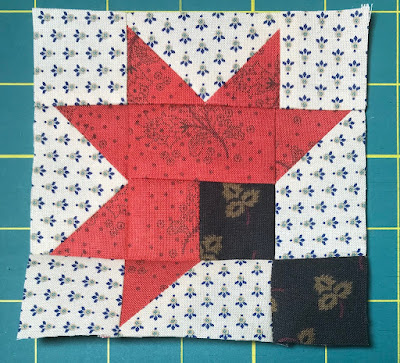 There are also a whole set of Star block units for this quilt.  Lots and lots of little pieces, which is normal for a Kim Diehl project.  I know I'll love it once it's done, but this one is stressing me out just a little bit so far.
Posted by Sara at 12:25 PM 4 comments:

I have some things to add to my weekly goals: some binding and some quilting.  And some yellow RSC blocks to add to my rainbow block sets. 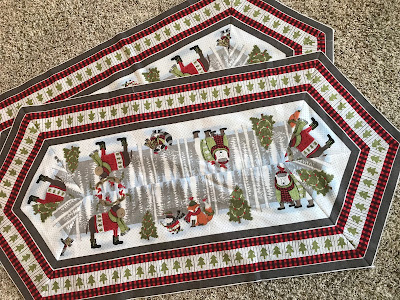 Yes, I did.  I made 2 more 60 degree runners from border prints.  I'm addicted to making these.  Once the strips of border print are actually cut from the yardage, it really only takes about 15 minutes to make the flimsy stage for a couple of these.  I stacked my 4 border strips, then used my 60 degree ruler to cut 2 sets of 4 triangles (ends), and then cut the 60 degree angles for those longer center sections.  Sew those triangles onto the rectangles, then sew the 2 halves together.  Fast and easy!!  Now I'm going to quilt these and get them ready to bind. 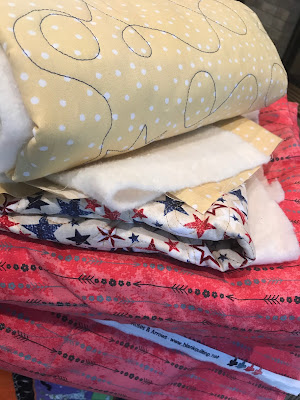 I also picked up some small projects from one of my quilters.  Carol did a great job on these.  There are now bindings to prep, and then attach.  Hopefully some of these will be completely done this week.
I'm linking up with Design Wall Monday.
https://smallquiltsanddollquilts.blogspot.com/
Posted by Sara at 10:35 AM 4 comments: