Farmers Wife Sampler blocks for this week are complete.  Practical Orchard is a really strange name for a quilt block.  I don't see anything about this block that would suggest such a name. I did a little research and found on a heritage quilt site that it was a variation of Fiddlers Jig, which has HST in those outer corners.  But I can't guarantee that info is accurate. 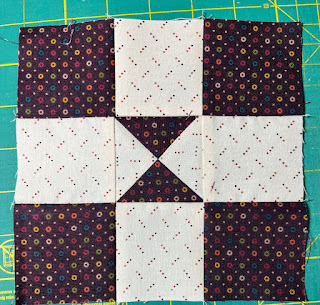 Postage Stamp was the other block for this week - made from 36 little 1.5" squares.  Hence the Postage Stamp name. 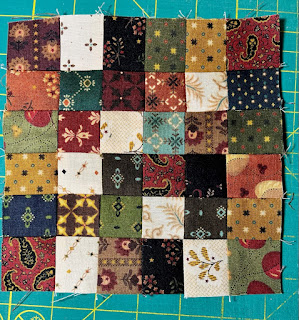 It was also time to work on the little signature blocks that our Simple Whatnots group plans to exchange in February.  I have had them all cut out for a couple of months, but had only sewn 4 of them up to now.  These are only 4.5" square so shouldn't take long to finish up. 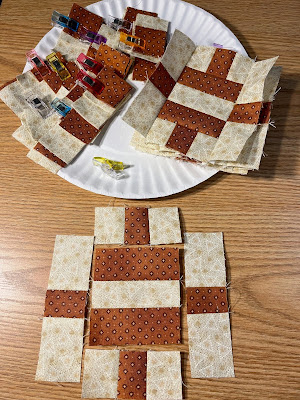 I keep starting to work on things around here (sewing and other stuff) and then getting sidetracked.  But it's only Tuesday, right?  And it's still January? 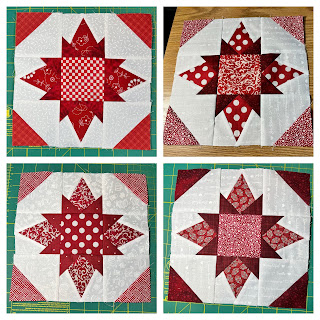 Yesterday I did make 2 additional red Twinkle Star blocks, so now there are a total of 4 red ones.  And there are now 31 total Twinkle Star blocks for a future quilt.
Once these were hanging up with the others, I began to cut out some red Nanci's Star blocks - and then that coffee themed potholder kit caught my attention.  So I got that cut out. And realized I could use the same pattern to make others with scraps because I had a whole lot of Insulbrite in the closet to use inside them.  The first squirrel that crossed my path . . . 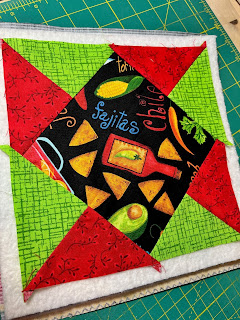 I made 3 potholders - one using that coffee fabric kit I bought, and 2 using scraps from the stash put together in the same pattern.  There was enough of the hot peppers print left from another project for one more potholder that is cut out and laying next to my sewing machine. Plus I know I have a whole lot of odds and ends of other coffee prints that could be used for more potholders.  . . . but then I got distracted before putting the binding on all 3 of these.
Prepping the binding for last year's Saturday Sampler quilt was the next squirrel that distracted me.  It's finally ready to sew onto the quilt once I get it trimmed.  I picked this quilt up from the quilter almost 2 weeks ago so it's time to get it bound and finished.
My TO DO list for the rest of this week is focused on progress and taking care of the partially done things piled up on the end of my ironing board:
**  binding the 3 potholders
** sew 3 red Nanci's Stars blocks
** cut out Farmers Wife Sampler blocks for this week
** trim & sew binding on Saturday Sampler quilt
** finish sewing tiny Signature blocks for Simple Whatnots
** sandwich Midnight (Simple Whatnots) for quilting
Posted by Sara at 9:21 AM 3 comments:

Two more Friendship Square blocks are done, using red framing.  The blue center with the Life Preservers and the black with the flowers both worked well with the red. 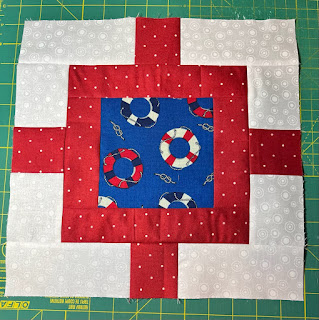 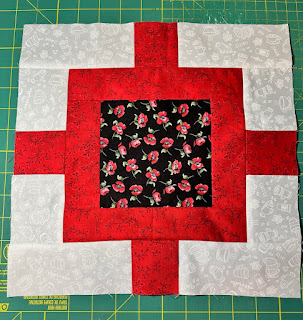 Laying out the 3 red blocks with the 3 I had made months ago does give me an idea of how these blocks will work together.  Two of the previous blocks have non-white backgrounds - one is grey and the other is a light beige.  That really tells me I need to use a variety of backgrounds on all of the rest of the blocks I make using this pattern.  The variety will look good and give this a more scrappy appearance. 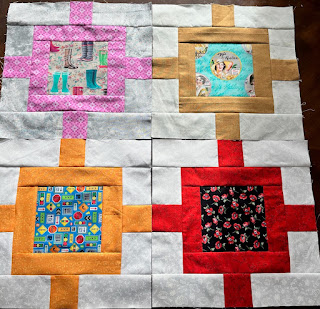 And with Monday Making:
https://lovelaughquilt.blogspot.com/

I've been whining lately about never "going anywhere" interesting.  Or actually about never going anywhere period, unless it's to some sport event.  Don't get me wrong, I do enjoy college basketball and do enjoy going to watch my young grandchildren participate in concerts or sports.  And I do appreciate the fact that there are many people out there who are even more cooped up since Covid.  But it would be fun to do something totally different once in awhile, right?

Thursday was finally my opportunity!  We were heading to Omaha for a college basketball doubleheader and visiting a niece and husband. The arena there requires masks so we felt pretty safe, particularly since there is never a big crowd there.  My husband promised we would leave early enough for me to stop in a couple of quilt shops on the way - one in Sioux City and one in Omaha.  Normally it takes us just under 4 hours to get to Omaha. 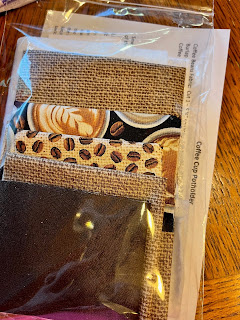 In reality, he got busy with a work project that he wanted to send out to his "guys" to review, and we left a lot later than planned.  I did get to spend about 20 minutes at the Heart & Hand Quilt Shop in Sioux City.  I picked up a cute little potholder kit with coffee fabrics. 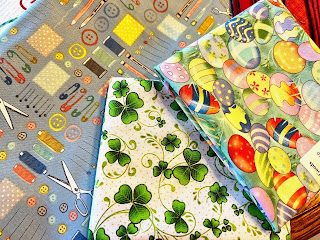 The sewing print is for cutting 6" friendship squares for my guild friends.  And I had to pick up a couple of seasonal fat quarters. 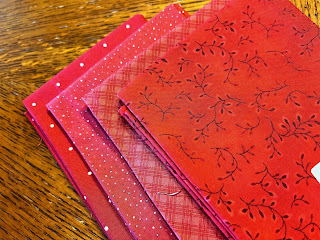 Replenishing some of my reds was one of the things I planned for my shop hopping, and I did pick up some red fat quarters.  I guess not having much time was probably good for my budget.
We got to Omaha and met my niece and her husband at the arena - where we watched 2 Jackrabbit wins on Thursday evening.  Our visits to Omaha are always enjoyable, but we seem to always bring bad weather. Last year we went down for the same games and ended up staying 3 nights due to the blizzard that followed us.
This year the winter storms were supposed to move in early Friday morning all up and down that - I-29 corridor.  So we decided to leave for home earlier than planned - before Omaha quilt shops would have opened up.  And we headed west instead of straight north to try to avoid the worst of the storm. 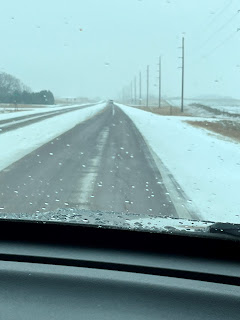 I was hoping to stop at the shop in Norfolk, Nebraska as we passed through.  But knowing we were about to run into icy roads and poor visibility, I didn't even mention it.  The last 90 miles or so looked like this, with a mix of freezing rain and snow.  Taking that western route home is slower but was a good decision as the interstate had lots of icy areas all day.  And shortly after we got home things got much worse here with more snow and wind, on top of ice. Good to be home safe and sound.
Posted by Sara at 5:11 AM 7 comments:

Our guild has this fun tradition of exchanging friendship squares.  When a member does any traveling and get to a quilt shop, they try to find a fabric that represents the location or experience in some way.  The member will cut 6" squares to share with the guild.  Obviously there hasn't been a lot of travel done in recent months/years but I do have a lot of these squares accumulated again. 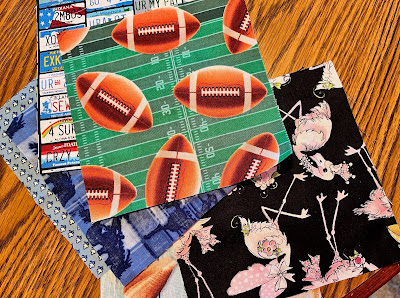 And a few adventurous members have shared some new squares with us recently.  These were in my "guild bag" and it was time for them to join the others.  When I pulled out my project box holding the collection of squares, I realized that I really do have a lot of them to play with.  Months ago I tried out a block pattern from Pat Sloan.  This one was from her Winter Fun series, and seems like a great way to use the squares without cutting them up and losing the fun prints. 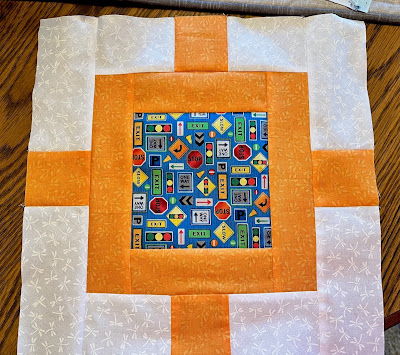 In 2016 - I finished a queen-sized quilt using the friendship squares.  It's on the basement guest room bed, and I really enjoy seeing all of the different fabrics.  I called it Traveling Stars.  Each star block used a square as the star center, and the star points were all fabrics that read solid. 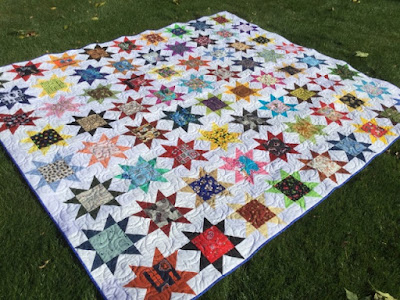 After digging around in the project box holding the friendship squares, it is obvious that there are probably more than enough to make a great I Spy quilt for some child.  So I think there will be more of these blocks made in 2022 as part of my focus on using up scraps in lots of colors. 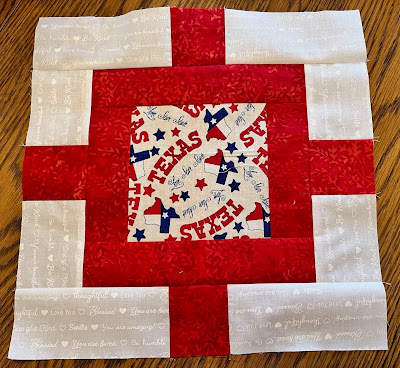 And here is a good start - finding the squares that will look great with red frames, like this Texas version.  I cut and sewed this block in less than 10 minutes on Thursday while waiting - impatiently - for my husband to finish whatever work project he said he was almost done with so we could get on the road.  I would have had time to make a couple more before he actually finished up.  He was seriously cutting into the small window of time I had planned to stop in a quilt shop before meeting our niece at the UNO arena for the Jackrabbit game.  How thoughtless of him to mess with my schedule!  LOL
I'm linking up with RSC today:
https://superscrappy.blogspot.com/
Posted by Sara at 5:02 AM 15 comments:

My last finish of 2021 was actually this UFO - the Row Quilt that was a Saturday Sampler back in 2004.  I had begun to hand quilt it and only had the first 4 row done.  I finally decided that I would hire the ladies at the local senior center to finish that hand quilting.  I just wasn't ever going to get it done, even though it's only twin bed sized. 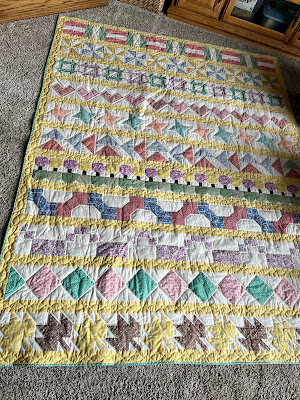 This photo is terrible in terms of color - but it does show the lovely texture of the hand quilting.  I still need to run an iron over the new stitching to remove the Frixon marking (heat removes it). 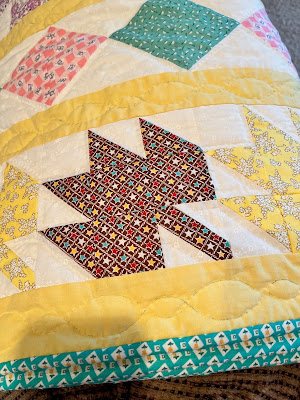 The sashing is all a butter yellow solid, the background is scrappy white, and the prints are all 1930s reproductions.  I was a much less experienced quilter when I started this one, and used a white on the back of this quilt.  White on the back - what was I thinking??
Posted by Sara at 5:50 AM 4 comments:

I've added another red Twinkle Star block.  Isn't this one a hoot?  I love, love, love that big polka dot in the star points. 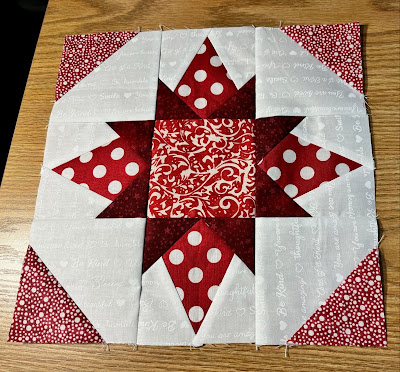 I haven't decided yet exactly how I plan to lay out these blocks for a quilt.  Sashing - pieced or plain?  No sashing at all?  Framed blocks?  But there are definitely plenty of options. 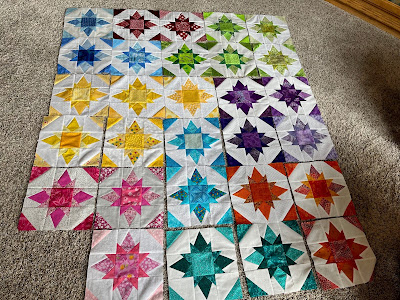 I laid out the the 29 blocks I have so far to see what colors I really should focus on.  There are plenty of yellow, purple, and green.  But I really could add more red or aqua or maybe some darker blue.
And honestly - if I want a nice big quilt then I'll need quite a few more blocks.
Posted by Sara at 5:30 AM 7 comments: