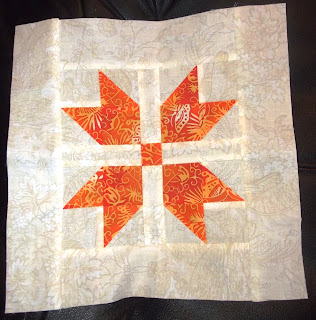 This block is in the mail and headed to my February block swap partner, Mary. Her preferences were neutrals and orange. I had some really pretty orange batik in my stash.

Hope it arrives OK and that she likes the block. It is simple, but I liked the sharp contrast.
Posted by Sara at 1:04 PM No comments:

Adding to the herd 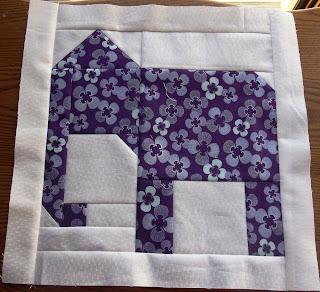 One more elephant block done. Now there are 4 of them. This one is purple. So far I've chosen fabrics with medium sized motifs: blue paisley, yellow dots, pink hearts, and now purple flowers.

These would look really cute in batiks too. Or 30's reproduction fabrics. Those would be perfect, wouldn't they?
Posted by Sara at 6:00 AM 4 comments: 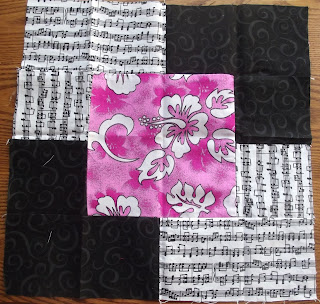 My February block swap package arrived Tuesday from my partner Mary. I love it - especially that tropical print in the center!
Thanks Mary. Hope you are patient because I probably won't get your block mailed until next week.
Posted by Sara at 7:01 AM No comments: 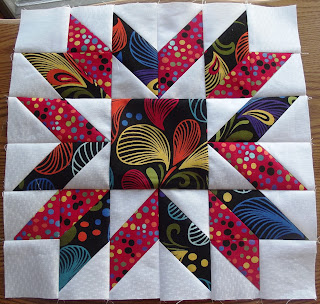 Here it is - block 11 done in the Ellie II fabric. The original pattern called for 2 fabrics in the star points and a third one in the center square. Well, as you can see I've not done that. I just used 2 fabrics. My center square is the same large print as the left side star points.
I'm not sure this was what I hoped for a result. But after taking the Terrain block 11 completely apart to fix my error, I can't bear the idea of doing that again with this one.
Posted by Sara at 6:41 AM No comments: 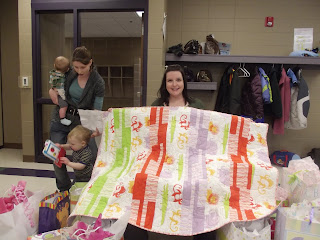 Laura likes her quilt. I kept the final results a secret from her until the baby shower. Well, on Saturday afternoon it was finally revealed.
My older daughter Jerilyn hosted the shower and is also in the picture holding grandson Mason.
The other little guy belongs to one of Laura's friends. There were 2 other pregnant ladies there and 6 kids counting these.
She received lots of great gifts, including some other wonderful hand made items. Her grandmother-in-law made her receiving blankets. One of her friends made burp cloths, bibs, and nursing pads. Another embroidered a skating motif (for the Roller Dollz) on a T. And she got a couple of handmade blankets besides the one from me. A baby can never have too many blankets in my opinion.
Posted by Sara at 6:30 AM No comments: 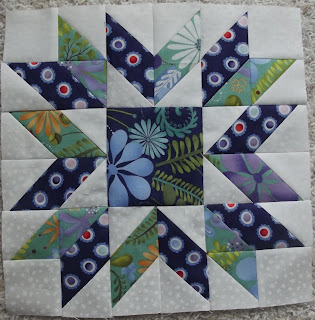 Block 11 in the Fat Quarter Stars quiltalong is called Fractured Star. It turned out beautifully.


However - I made this block twice due to a big mistake I made.


It looked kind of tricky, so I read, measured, cut, laid things out and then double checked to make sure I had it right. Should have triple checked!!!


I've been making these blocks in 2 fabric lines. And I managed to mix in one of the "warm" colors from my other fabric line when I put this block together. So then I took it all apart to replace those pieces rather than just remake the block from scratch. And my reason was that I had used the last of that blue dot in here - and I really, really wanted it in this block.


But it was worth the 2 and a half hours this whole process took. The block turned out beautifully.
Posted by Sara at 6:00 AM 6 comments:

A small herd of elephants 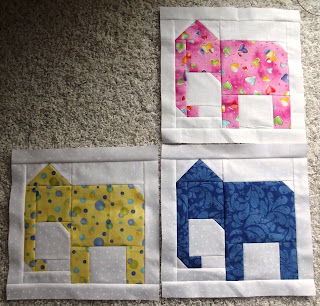 Not the best picture today. The light is so grey since it is snowing outside.

But the herd of elephants is slowing growing. I also added a 1.5" border around each elephant so they will float in the block. Aren't they cute? I have a purple fabric, an orange fabric, and a green fabric set aside to add to the herd.

I have not decided yet just how many to make, but they will eventually have a home at my oldest daughter's house since she requested them. 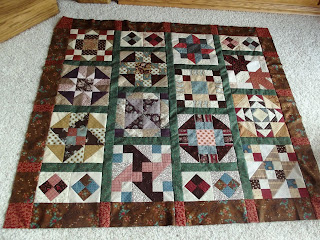 Color Me Happy - not only is that the name of this past year's Saturday Sampler design, but that is how I feel this morning.
It's President's Day weekend and I have a couple of extra days off to do some fun stuff. This morning I put that last 2 rows on my quilt top. Now I'm headed to lunch with some friends. Later today I'm going to babysit my grandson, and tomorrow is Laura's baby shower. Monday I plan to put the rows together for my other Color Me Happy quilt top in black and white and brights.
Meanwhile, the husband is sleeping off his nasty cold bug and just hopes I leave him alone to rest.
I LOVE long weekends.
Posted by Sara at 11:33 AM No comments: 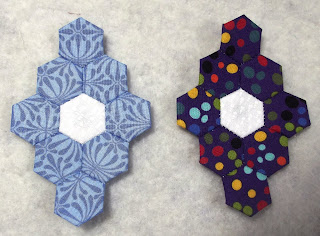 OK - I admit to yielding to temptation again and making more hexies. It is Cindy's fault. But they are such fun!!


I had some very small scraps of fabric that I was about to dump into the trash on Sunday evening as I cleaned up my cutting area. Then I changed my mind - and these are the result. I saw this layout on a blog recently and just had try it out.


I have no idea what I'm going to do with them yet, but it was a relaxing way to break up the monotony of sewing on binding while watching TV the last couple of evenings.
Posted by Sara at 6:30 AM 2 comments: 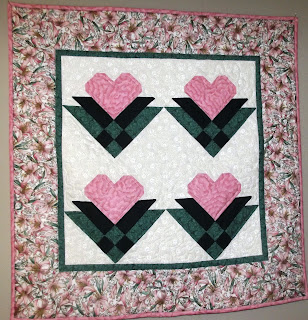 Happy Valentine's Day! While I eat my lunch I thought I would share a couple of appropriate quilts.
This heart wallhanging is something I made sometime in the 1990's. I did not label it and I didn't start journaling my quilts until 1998. So the year isn't recorded for this one. But I still love it and it hangs on the wall in my sewing room most of the time.
The table runner on my table is much more recent. I've made several of this pattern, both rectangles and squares. Love the pattern. It is called Waffle Time. 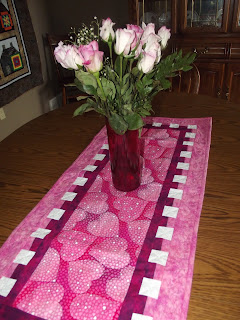 Growing up so fast 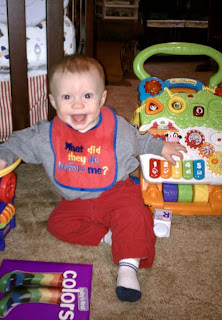 Can't believe Mason is 8 months old already! Love this happy little face and wish I could see it every day!
Posted by Sara at 9:22 AM 1 comment: 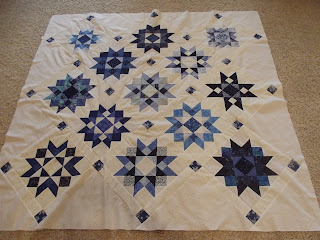 Now what should I do with this quilt project?

The first issue with this quilt top is that it does't lay flat. Some of that problem can be solved when it is quilted, but it worries me. The cause is that the blocks are not all the same size. I won these blocks, and there were some of the 15 that were definitely smaller than the 12.5" unfinished.
If I had tried to make them ALL smaller, then the star points would have been cut off on the larger blocks. I couldn't live with that. And ALL 15 blocks are too pretty to spoil.

So I stretched and ironed out the smaller blocks. The 2 smallest ones I've saved to use in the pieced back. And I sewed scant seams on the others when I put them all together. But . . . it has made for some pulling together in the middle.

The second issue I have is that I think it really needs some borders. I have enough of the snowflake fabric I used in the cornerstones to add a border. Should I add 2 borders? Should I add a pieced border? I need some ideas and I just know I need to "live" with this top a while longer to figure it out.
Posted by Sara at 6:30 AM 4 comments: 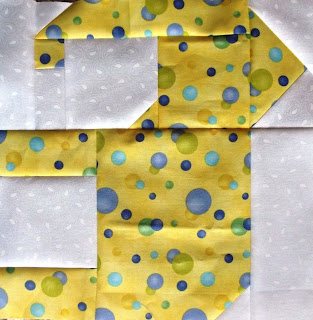 Don't you just hate it when a picture is posted sideways? I have done everything in my power to rotate this picture, but it's just not working. Oh well . . .

I was playing with a few scraps on Sunday afternoon - just because I couldn't resist. I saw this darling little elephant block on a blog I read and just had to make one. Now I'm thinking I may make some more scrappy elephants and use them in a child's quilt. It would be a cute donation quilt or even a cute baby gift.

This free block pattern is from Milk and Honey Quilts blog.
Posted by Sara at 6:30 AM 2 comments: 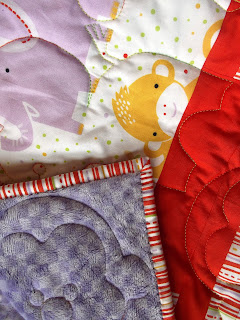 I'm working on the binding for my latest baby quilt. This one is for my granddaughter who is due in March. Love how the stripe is working out for this. It has a little of the lavendar and the lime, and lots of the orange.

I can't wait to give this to my daughter at her baby shower in a couple of weeks.
Posted by Sara at 6:30 AM 1 comment:

The picture of relaxation 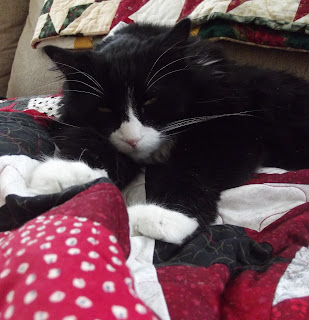 This is the definitive relaxation picture in my house. My cat Sammy loves my quilts! And the lumpier, the better.

This quilt was draped over my husband's lap while he watched TV recently. And the cat was stretched out on top. And believe me - a 20 pound cat stretches out a long way!!

Wish I could be napping with a quilt today, instead of working. But I guess I need to keep working to pay for my quilting hobby.
Posted by Sara at 6:30 AM 1 comment: 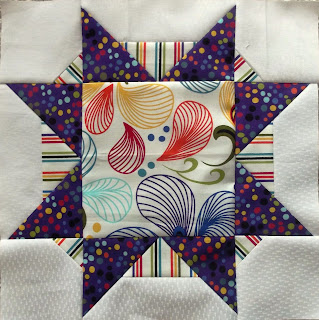 Block 10 in the Fat Quarter Stars quiltalong is complete in both fabric lines. Another fun and simple block. this one was designed by Michelle Foster of the Quilting Gallery website. I really like the rounded effect that the block has.

In the Ellie II version, I cut the little corner on the bias because I just had to make the stripe look like it radiated out of the center like the sides did. It was so small however that it didn't stretch. I like the result.

The Terrain version gave me the first opportunity to use the fun purple fabric that is in the center. The geometric design seemed lost in most of the early blocks, but this center is 6.5" square, so it worked out perfectly. 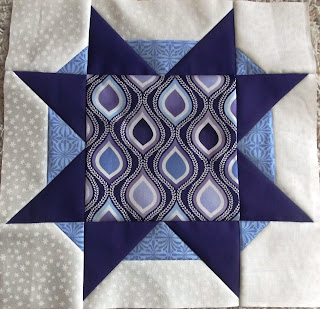 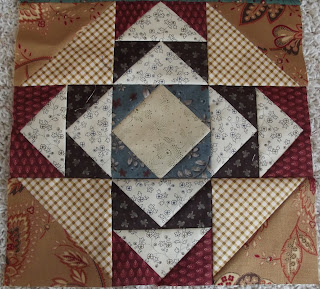 Over the weekend I finished block 12 of my Saturday Sampler in both colorways. I'm doing the "official" block in a traditional colorway that has lots of soft dusty aqua and rose and browns in it. It's not my usual choice in colors, but it is turning out so pretty.

The second one is just coming out of my stash and using black and white as the base, with a bright accent added for fun. This is more my usual taste and I am really liking this one too.

There is ONE more month in this sampler and that will add a "half" block to each row. I have my rows all pieced and ready to set in the last sections for both quilts. It's so exciting to see the end in sight. And I'll have TWO quilt tops finished!

It's funny how different the two quilts are turning out even though the pattern is the same. That is the magic of quilting, isn't it? 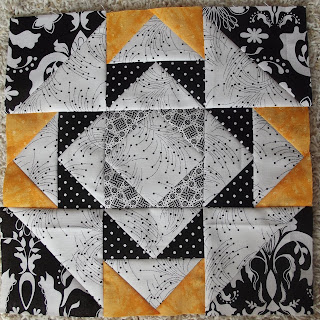