After finishing a couple of things to the flimsy stage last week, my focus this week will shift - to a couple of new projects, and at the same time stay focused on some of the goals I've set for the month of September. 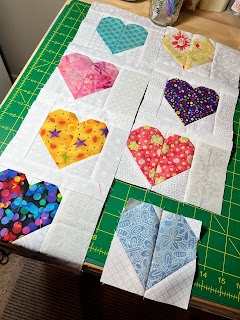 Scrappy small hearts were a challenge from this past winter in our Sew Vintage group. Actually, the challenge this year has been to focus on scrappy sewing.  The heart pattern was shared as a possibility because the pattern itself had several sizes including this little 4" (finished) heart.  My little box has some finished hearts, some with the background sewn onto the halves but not trimmed or pressed, and some strips waiting to become hearts.  That way I can just grab parts and pieces whenever I want. 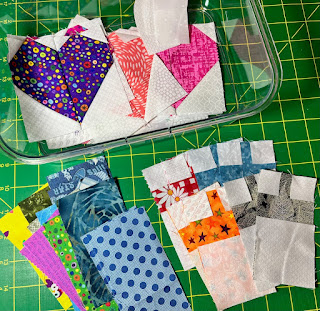 I've been sewing a few hearts here and there since January and they have added up as "leader/ender" as I worked on other projects.  In the past couple of weeks, a layout began to present itself.  Half of the hearts will get 1.5" side sashings, and the other half will get a 2.5" strip on just the right side. When joined into columns with 1.5" strips between them the hearts will dance around just a little bit instead of being in straight rows. 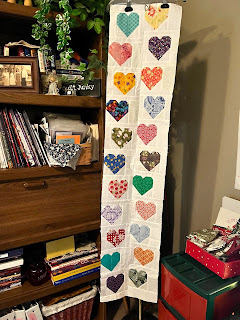 Top priorities this week?  Saturday Sampler block #11 is my first priority.  I made the Christmas block, and the red/grey pieced sashing is ready to be added.  And then I'll make the block in the other 2 colorways I'm doing.  We're so close to being done which is exciting. 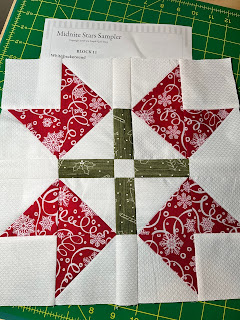 There is a second light blue elephant block ready to sew,  and one Ohio Star - both using leftovers from that border fabric that I love. 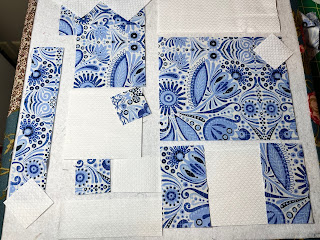 I bought Heat & Bond on Saturday to trace the parts and pieces for the Boo Buddies wall hanging.  Hopefully I'll get those all traced and maybe fused onto fabric this week. 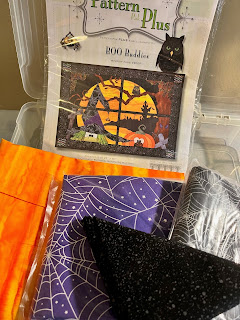 The binding is ready to attach to the Tulip Time quilt sometime soon.  More small hearts and scrappy Pyramid blocks will probably happen along with more Ohio Stars blocks.  There are also a couple of pillowcases ready to sew and fabric set aside to kit up new pillowcases for my grandkids to tuck into their Christmas stockings.  No lack of things to work on this week for sure.
What is on YOUR design wall this week?
https://smallquiltsanddollquilts.blogspot.com/
Posted by Sara at 5:30 AM

I understand why you're going to use every scrap of that lovely blue. The colorful hearts really do dance!

The small hearts are adorable and a superb scrappy project! Your setting is going to make a lovely quilt.

Your heart blocks are really pretty.

Far Side of Fifty said...

The hearts are dancing for sure! Fun strips to work on!
This week I am working on the Christmas Cards I designed. I watched a water color video and went from there. Tomorrow we have a Defensive Driving Class all morning...no sleeping in. :( :)

Can't really go wrong with an ongoing little heart project, can you! They are adorable and I really like the way the hearts are going to dance. I have a GGN (Great-Great Niece) who may need a dancing heart quilt!! Thank you so much for sharing. Stay safe and sew on !