Circa 2016 is coming together

The zillions of 3.5" blocks for the Temecula Circa 2016 quilt are done - assuming I've counted correctly.  If not, then I'll just have to make more won't I? 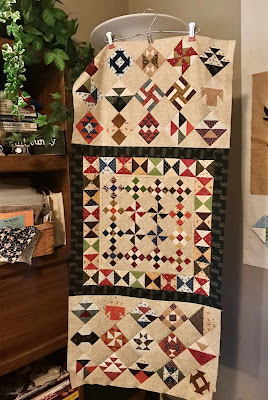 That center medallion section required a frame and I used a black print, which will also be used for the wider outer border at the end.  Then 2 panels with 15 tiny blocks each were added to the top and bottom of that framed medallion.  Every block is set on point and alternated with those setting squares and setting triangles.  Now I'm working on the side panels, which are pieced similar but with only 2 tiny blocks across.
This is a major scrappy project, although it was a "planned" scrappy.  And after 5 years, it's definitely time to finish this one up.  I'm almost afraid to set it aside to work on anything else until I at least have those side panels assembled and attached, for fear that it will become a UFO again.
I'm linking up with the Rainbow Scrap Challenge today:
https://superscrappy.blogspot.com/
Posted by Sara at 5:30 AM

I love hearing from my readers! Your comment has been saved and will appear after being approved by the moderator.