It hasn't been a very productive week for sewing, but since I love making random blocks . . . then I guess it was OK after all.  Because for the most part, random blocks was the only thing that happened this week. 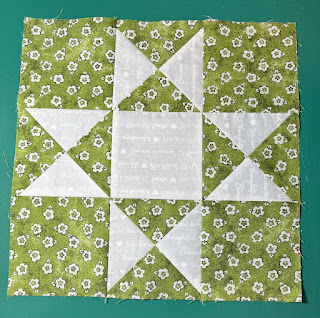 A single Ohio Star block happened with the green used as the background. 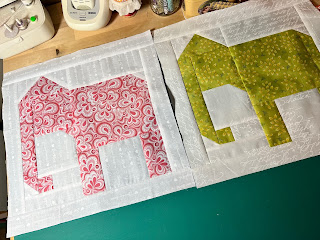 I added 1.5" borders to both of the elephant blocks that were already made, so that the blocks are now 12.5" square.  It will give them each a bit of separation too. 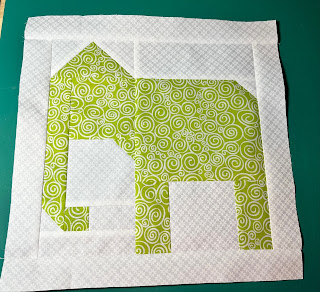 Another green elephant came to play, and then a kind of coral-pink one too. 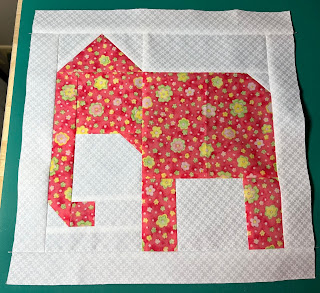 I might go back next month and make a couple of them from yellow or maybe aqua, while I'm making some with whatever color we play with in June.
Check out the RSC projects shared by many . . .
https://superscrappy.blogspot.com/
Posted by Sara at 5:08 AM

Any progress is good progress!!

I like the light on dark star. I've got way too many random blocks/units on hand, but I can still put the lid on the box.

Your elephant blocks are adorable. Aren’t they addicting?

The herd of elephants is growing and looking great also pretty Ohio star!

Sometimes random blocks are all we can manage! You found some pretty greens for yours. I downloaded that elephant pattern after you shared it last week - I'm going to have to make one!

all progress is good! can hardly wait to see your herd!

Far Side of Fifty said...

Your herd is looking good! :)

It's a great idea to go back and make extra elephants from the earlier colours. What a wonderful herd you will end up with!

Love those elephants! The pink one is my favorite of the set. Hopefully the holiday weekend has give you lots of opportunities for stitching time and you've had a chance to play with something fun.

What a cute block! I luv it!

Love your herd of elephants! June's dark blue ones will be darling too!

Some weeks just aren't productive, I guess, but you did get SOMEthing done! Very cute elephants, by the way.