Laying out quilt blocks on the floor is that step toward completion that I look forward to.  And then I play with the arrangement to distribute the colors well.  Getting this one into a completed quilt top is one of my goals for October. 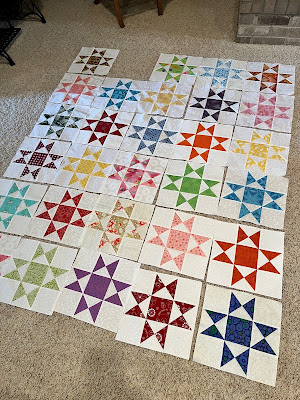 This was what the Ohio Stars (#2 version) looked like - with 1 block missing.  I swear I had these counted and came up with 30, but it was only 29 blocks. 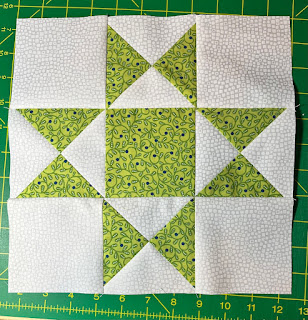 It was an easy fix - by making 1 more block.  Since the October color for RSC is lime and light green there were some green options laying on the cutting table already. So this one was the result.  Hopefully by the end of the week the blocks will be sewn into rows, and those rows sewn into a flimsy.
I spent most of the morning yesterday in my sewing room, and finally sewed all of the various blocks that were kitted up and laying on 2 design boards.  A lot of cutting happened over the weekend, and that included a big bunch of blocks - some QOV blocks, and some RSC blocks.  There were also some blocks to alternate with existing ones in a Sew Vintage scrappy project.  I'll share those another day.
Posted by Sara at 5:12 AM

Your blocks are lovely, this is going to be a beautiful quilt! I never have the correct number of blocks no matter how many times I count them. I'm always under or over. Happy stitching!

I like this one!
and - you probably did make another one - its just under the ironing board ( or like me, in the fridge!! don't ask haha)

Pretty blocks! I usually “find” a missing block hiding under another block.