Two weeks down and 8 blocks made for Bats & Boos - a Fat Quarter Shop Mystery sew-along. 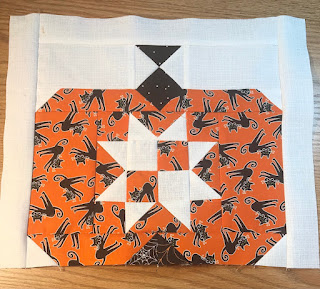 Week 2 was a pumpkin block with a cute little star in the middle.  I made 2 of them using the black cat print, and the other 2 using a candy corn print.  The cats were in my stash, but the candy corn print was part of a new fat quarter bundle purchased very recently.  This year's Halloween fabrics are the cutest I've seen in years!! 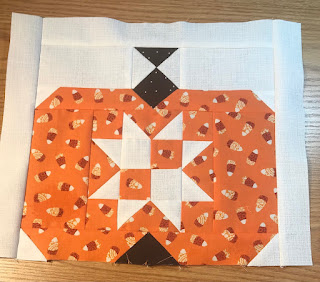 Week 1 was the bat blocks.  I made them all the same, using the glow-in-the dark print for the bat wings and ears.  The background looks white in these photos, but I actually dug out a soft cream from the stash to use for this project. 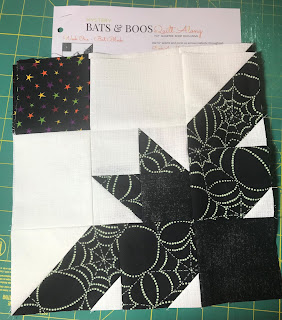 The Week #3 block was posted Sunday, but there was no time to work on it or even chose fabrics. The block is a single intricate  star, and the 4 bats and 4 pumpkins will fit around it.
The other thing that happens on Mondays, is the next 2 Farmer's Wife Sampler blocks posted.  A friend and I are doing this together via Facebook.  I have to admit that I didn't get last week's blocks done.  I only got as far as printing a couple of new templates I needed.  But I'll get caught up this week with all 4 blocks - last week's and this week's.  I refuse to fall any further behind because we still have a LOT of blocks to make and they are turning out so nicely.  This is a picture in the book of one of last week's blocks.  Mine all use leftover scraps from Kim Diehl projects. 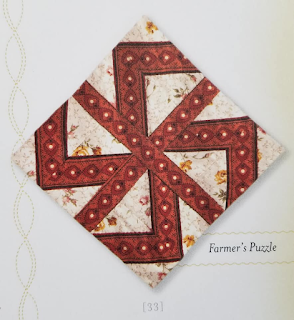 Also this week I plan to get the 3 vertical sections of my Saturday Sampler sewn together.  I had planned to do it last week, but got sidetracked.  And last but not least there will be a new block for Pat Sloan's Summer Soiree posted on Wednesday.
None of this will happen today however as I have 2 of the grandkids here for the day, and then will be delivering them to mom after work so they can go to their back-to-school open house.  And I’m fitting a pedicure into the day as well.
I'm linking up with Design Wall Monday:
https://smallquiltsanddollquilts.blogspot.com/
Posted by Sara at 5:30 AM

I love hearing from my readers! Your comment has been saved and will appear after being approved by the moderator.